The Economic and Financial Crimes Commission, EFCC, is set to start a clampdown on the fraudulent use of Point Of Sale, POS Machines in the country.

This was disclosed by the Makurdi Zonal Head of the Economic and Financial Crimes Commission, EFCC, Johnson Babalola, in an interactive session with Regional Bank Managers at the EFCC Zonal office in Makurdi, Benue State on June 13, 2019.

Speaking on behalf of the acting EFCC Chairman, Ibrahim Magu, he charged banks to ensure proper monitoring and strict compliance by those to whom they issue POS machines.

“We are having serious challenges with the banks giving POS machines to individuals with questionable characters and without proper documentation,” he said.

He pointed out that there was a need for some of the POS machines to be withdrawn from such individuals.

He also warned banks to adhere strictly to the Post-No-Debit (temporary freezing of account) order placed on banks found to be involved in suspicious transactions. “Default will not be tolerated,” he said.

He noted that it was unfortunate that some staff of banks were in the habit of giving prior notice to customers whose accounts were being placed on Post-No-Debit, thus “aiding and abetting crime and obstruction of justice, instead of assisting the Commission as stipulated by law”.

He further urged the banks to “respond on time to the letters of investigations sent to them by the Commission”, stressing that prompt response will help in speedy dispensation of cases.

“You need to always report any suspicious transactions as required by law,” he added. 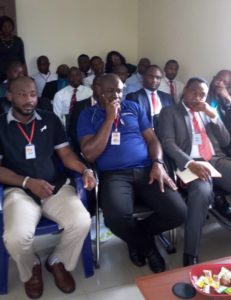