The acting Chairman of the Economic and Financial Crimes Commission, EFCC, Ibrahim Magu has called on members of the National Youth Service Corps, NYSC, to be change agents in a bid to rid the country of corruption.

Magu, who was represented by the EFCC Port Harcourt Zonal Head, Abdulrasheed Bawa, stated this on Tuesday, August 20, 2019 when he received members of the EFCC/NYSC Community Development Service, CDS Phalga group, who paid a courtesy visit to the Office of the Commission.

“The fight is not for the EFCC alone but for all stakeholders in the country and we must all fight for the development and unity of this country,” he said.

We Did Not Raid Ex-Gov. Ambode’s Residence-EFCC

He also encouraged them to convey the anti-corruption message to other Nigerians in a bid to take ownership of the war against graft. 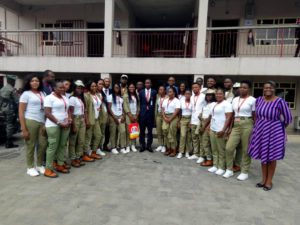