The governor, at the swearing-in ceremony, said fairness, equity and justice are trademark of his administration that all political appointees must imbibe, emphasizing that his administration has zero tolerance for sectionalism and nepotism.

The governor who congratulated the Commissioners observed that the expectations of Deltans are high and urged them and other political appointees to see themselves as people who are “representing the entire Delta people in the cabinet, and that you are there to serve their interests, because, the task before us is huge; we have set the goal of building a Stronger Delta predicated on Prosperity, Peace and Progress.”

“Yes, it is true that each of you was nominated from a Local Government Area, but the moment you become a Commissioner, the entire Delta becomes your constituency and as such, you must be fair to all and be responsive to the needs and aspirations of all and sundry,” he said at the ceremony which was attended by his wife, Dame Edith, his Deputy, Barr. Kingsley Otuaro, former Deputy Governors Benjamin Elue and Prof. Amos Utuama (SAN), among top politicians from across the state.

He admonished the Commissioners to embrace the concept of team leadership and collective responsibility, emphasizing, “you cannot operate in isolation or be a one man riot squad; employ and deploy the knowledge, skill and experience of the civil service personnel that work with you; you will need them to succeed.”

“As Commissioners, you must lead by example; do not expect your staff to be punctual if you are in the habit of coming late to the office; do not expect them to be prudent with government resources if you are wasteful; do not expect them to go the extra mile to meet targets if you are not willing to do so yourself; people don’t do what you tell them; they do what they see you do because, as the saying goes, everything rises and falls on leadership; the buck stops at your table,” Governor Okowa stated, adding, “be prayerful; put your trust in God; ask Him for wisdom, strength and direction; depend on Him every step of the way and He will see you through.”

Responding on behalf of all the Commissioners who were sworn-in at the occasion, Prof. Muoboghare thanked the Governor for choosing them to be members of his team to build a stronger Delta, assuring that they will discharge their duties with the fear of God and will be fair to all Deltans. 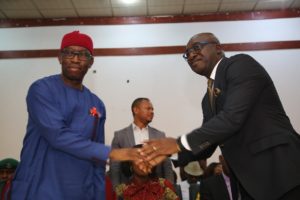 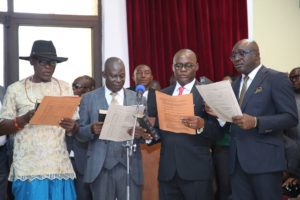 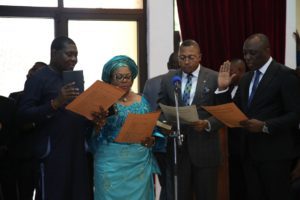 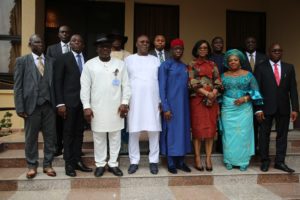