Wife of the President has called on citizens of Adamawa state to unite and move the state forward, stressing the need for peace and love as necessary ingredients to steer the state to the path for accelerated socio-economic development and prosperity. She was speaking during a Town Hall meeting she organized in partnership with some concerned citizens of Adamawa state, on Saturday 20th April, 2019 at the Banquet Hall, Government House, Yola.

Mrs, Buhari noted that Adamawa is at cross-roads due to recent political developments in the state that have left people in a state of uncertainty about the future. Issues of politics, security, influx of displaced people, declining rates of enrolment, coupled with a growing number of unemployed youth. The only hope and solution, she said, is for Adamawa people to join hands and form a coalition towards uplifting the state from its present predicament.

She advocated for the convention of regular town hall meetings across the different zones of the state to serve as a platform for engagement and exchange of ideas between government and the people. She also called for the establishment of an Adamawa state trust fund to finance prioritized developmental projects.

Also speaking at the event, Deputy Governor of Adamawa State, who represented the Governor at the event, Engr. Martins Babale commended wife of the President and the concerned citizens for convening the meeting urging the people of Adamawa state to embrace peace so that development can be achieved. He highlighted the efforts of the state government in bringing development to the state.

Keynote speaker at the event, Ambassador Fati Ballah, Nigeria’s former ambassador to Botswana, said Adamawa had produced brilliant minds and fearless soldiers all through the history of Nigeria and said history will be kind to the state because of this feat. She however noted the downward spiral being experienced in many aspects, noting specifically the fragmentation of the people along religious and ethnic lines, and called on the people to join hands and speak with one voice as well as spread the message of peace.

The event, which was well-attended by Adamawa indigenes from far and wide, was interspersed with musical entertainment from different parts of the state. 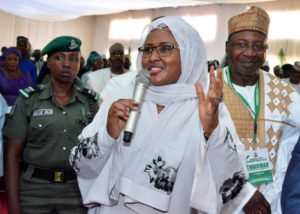