The President, Trade Union Congress, TUC, Quadri Olaleye has declared the congress’s support for the anti-corruption efforts of the Economic and Financial Crimes, EFCC.

Speaking on Wednesday, July 10, 2019 while on a courtesy visit to EFCC headquarters, Olaleye told the Acting Chairman of the Commission, Ibrahim Magu that, “Your friends are our friends and your enemies our enemies. Any time our support is needed we will give you.”

While responding to the trade unionists, Magu urged all Nigerians to work towards stamping out corruption in the system, noting that the evils of corruption knows no boundary, ethnicity or religion, race “as it affects everybody.”

The EFCC boss reiterated his readiness and that of the anti-graft Commission to work with all Nigerians and groups to root out corruption in the country, saying “we are encouraged and determined to win the fight; though we cannot do the work in isolation. If there is anything we need, it is all the support we can get from every sector.”

Speaking further, he said, “Every Nigerian has a right to say no to corruption and bad governance,” noting that “if we have zero per cent corruption, it means there would be hundred per cent development as they are directly interrelated. The lower the corruption, the more developed a nation becomes.”

Magu expressed regret over the country’s huge stolen wealth, saying that such has contributed to the stunted development of the country. He observed that schools are in a shambles and hospitals lack facilities due to corruption. “Monies meant for development were diverted and laundered to purchase properties outside Nigeria. Five billion Naira in one’s pocket? That will be able to build standard boreholes in villages all over Nigeria.” Magu noted.

Olaleye praised Magu for his courage in the anti-corruption fight and urged him to do even more. 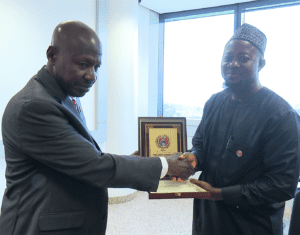